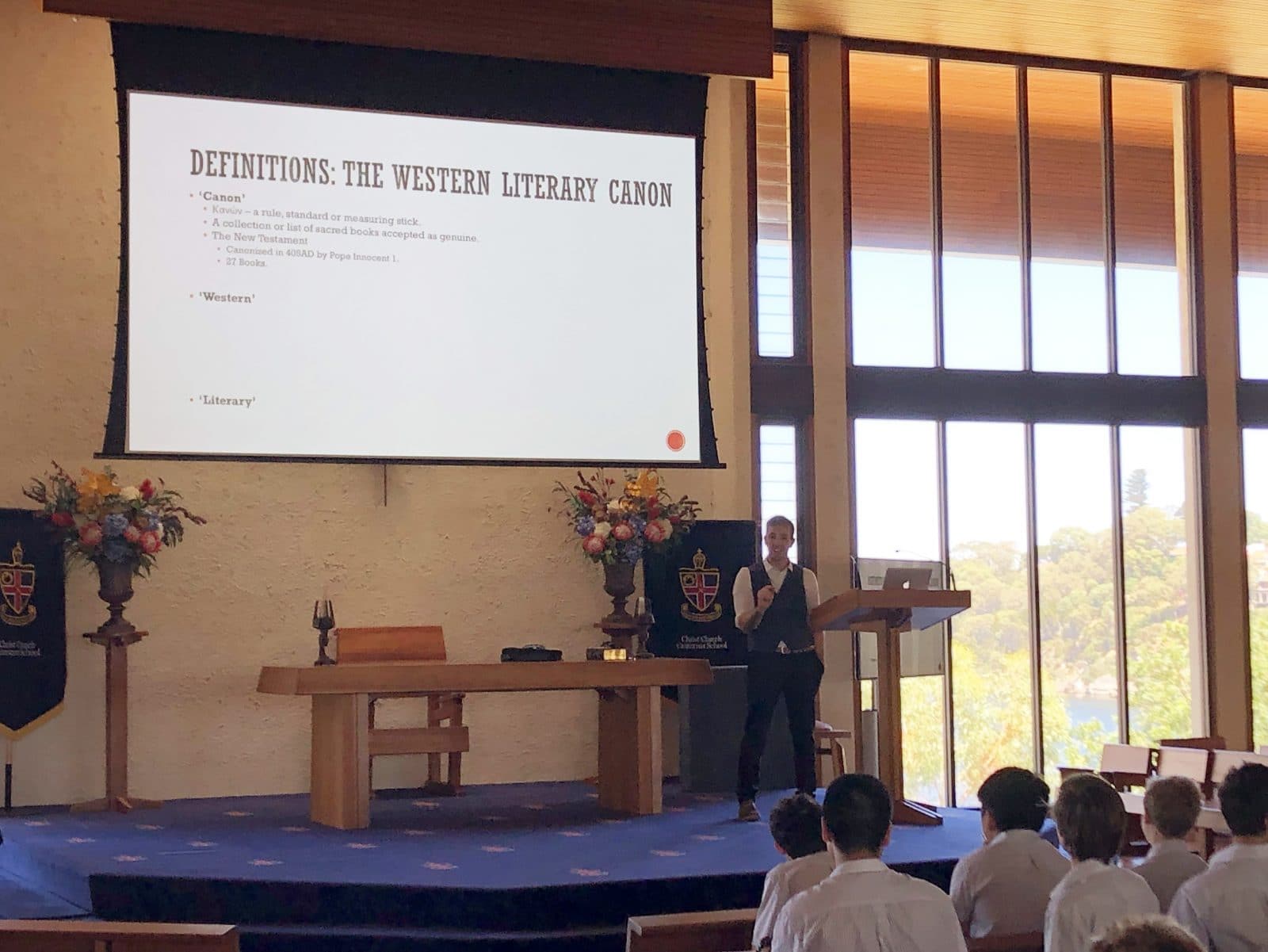 What makes a text canonic? Who decides which texts make the cut? Is it simply luck that Bronte, Dostoevsky, and Homer are repeatedly held up as literary classics? Or is it something about morality, politics and identity… These questions and others were at the heart of a special chapel lecture recently hosted for our Year 12 Literature students.

Delivered by Assistant Head of English and Year 12 Literature Teacher Mr Spencer Davis, 60 Literature students were taken on a journey through the dynamics and politics of the Western Canon. This included discussions on how a text becomes canonic, and the historical incidents that help shape the list of great texts.

“The most frustratingly fascinating part of such discussions is always the luck factor,” explained Mr Davis to the Year 12s.

“To think, had Julius Caesar’s ships not ‘accidentally’ burned down the Alexandrian Library in 48BC, we’d without doubt have more than 33 extant Greek Tragedies.”

Among those in attendance was School Captain, Patrick Mahoney who commented, “I found the discussion regarding the political basis of the selected canon particularly interesting. It is certainly intriguing to consider the impact that various bias and ideologies have had on this list.”

The different literary eras, from Classical to Renaissance to Modernist, were also discussed and debated, whilst the students were provided with information on iconic groups of writers such as the Romantics, the Metaphysical Poets, and the Beat Writers.

“The lecture gave me a better perspective on how literature has developed and gelled together over time by framing the texts within the Literary Canon as reliant on each other, rather than being solely independent,” said Edward Elias, Vice-Captain of Noake House.

“We believe it is important to provide the boys with a good overall grounding in literary history and its quirks,” says Mr Neil Walker, Head of English and Literature.

“These sorts of lectures are very useful in framing up the larger conversations around morality, politics and aesthetics that we may not always have time for. Incorporating a presentation like this, which conceptually is at the tertiary level, is a good provocation and challenge for the boys.”

The School’s English Department intends to make regular use of the Chapel for additional lectures throughout the year. If you would like more information or have any questions for the English Department, please email nwalker@ccgs.wa.edu.au.