Old boy Michael Lukin (’15), who recently returned from Yale University studying his Masters in Music Conducting, will be directing a concert at Christ Church Claremont this Saturday themed around the Feast of the Transfiguration. The concert will feature an octet of some of the best choral singers in Perth.

After graduating from Christ Church in 2015 Mr Lukin enrolled in a Bachelor of Arts degree at the University of Western Australia majoring in Music Studies and Political Science & International Relations. At the end of 2018, he graduated from UWA and then commenced a Bachelor of Music Honours degree at the Western Australian Academy of Performing Arts (WAAPA) at the start of 2019.

In 2020 Michael was awarded the Western Australian Postgraduate Fulbright Scholarship and in the same year was offered one of only four places available in the Yale conducting program. While he waited for the Yale course to begin, Michael served as the Acting Director of Music at Christ Church Claremont from March – September 2020, obtaining crucial professional conducting experience.

Michael will be returning to Yale later this month to commence a second Master’s degree in order to further his conducting skills under the tutelage of renowned British conductor David Hill.

The Transfiguration concert at Christ Church Claremont grew out of a conversation he had whilst still living in the United States.

The liturgical Feast of the Transfiguration – the commemoration of the occasion when Jesus went up to the mountain and was covered in dazzling bright light – inspired Michael to design a repertoire list around this theme with almost all of the pieces on the programme dealing in some manner with the metaphor of “light”.

Some of the works will be performed unaccompanied while others will feature the organ, the works contain a mix of both Latin and English texts, and the compositional dates of the chosen works span some 500 years, encompassing a multitude of different musical styles.

Personal friend of Michael and fellow old boy David Woods (‘16) will be performing as one of the basses in the group.

Mr Woods was recently appointed Music Co-ordinator and Director of Choral Music at St George’s College UWA and is completing his Honours in his Bachelor of Music degree at UWA as well as singing for many vocal groups.

If you could use a little light to brighten this gloomy winter, Michael and David would like to encourage you to come along and experience what promises to be a wonderful concert this Saturday, August 6th at 2pm.

Tickets can be booked in advance here: www.trybooking.com/CBDJP 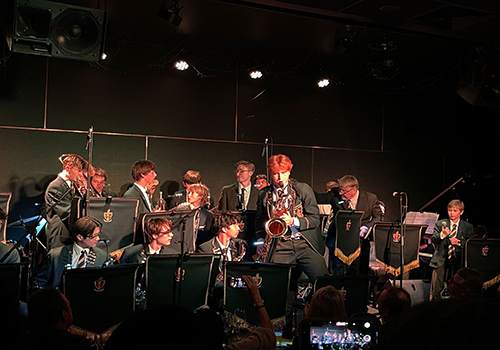 Students get the crowd swinging at Ellington’s Jazz Night The Christ Church Grammar School Senior Jazz Ensembles put on an electrifying performance in front of a sold out crowd at the Ellington Jazz Club on Monday night. read more