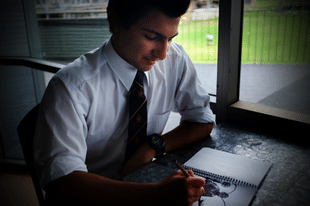 Year 12 student Rohan Golestani has been selected to take part in the City of Fremantle’s 25under25 exhibition as part of National Youth Week. The exhibition, which will be held at the Moores Building Contemporary Art Gallery in Fremantle, celebrates the best young artists under the age of 25 from Western Australia.

Acting Head of Art Anna Rowe said of the 86 submitted entries, only 25 were chosen, and will be judged by local professional artists. Rohan, who is also the School’s Art Captain, has submitted a drawing titled Bird Creatures.

Rohan said the subject matter was based around the story of his family’s heritage – his grandparents fleeing Iran in the early ‘70s because of the Revolution. “The experiences that my grandparents endured have shaped my outlook and perspective on life,” Rohan said.

Mrs Rowe said Rohan lived and breathed visual art and is highly engaged with the youth art scene in Perth. “Rohan’s style is informed by one of his idols, Shaun Tan, and he often works in ball point pen or marker,” Mrs Rowe said. “Detail is key to Rohan’s work. He is prolific and displays the utmost professionalism within his art practice.”

The exhibition, curated by Feast Yours Eyes, runs from Friday 26 April to Sunday 5 May.