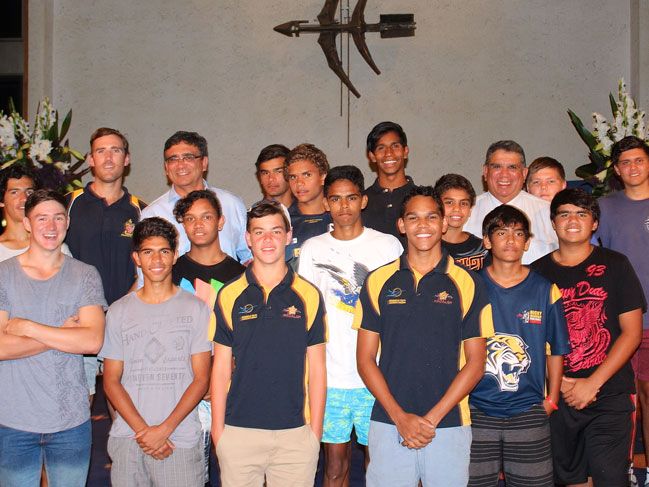 Australian rugby union legends Glen and Gary Ella delighted the audience at the sixth annual Canon Frank Sheehan Oration, held in the School Chapel, on Sunday evening. The former Wallabies shared their personal experiences and talked about their involvement in helping young Aboriginal men and women fulfill their dreams.

Director of the Centre for Ethics Frank Sheehan said the evening began with a video of Ella Magic, featuring Glen, Gary and brother Mark scoring miraculous tries for New South Wales and Australia. The brothers then spoke about growing up in La Perouse, a suburb of south-eastern Sydney, recalling the encouragement of their mother as well as her insistence on a disciplined approach to life.

Father Frank said they recounted various sporting triumphs along with the challenges that inevitably accompany those moments of ecstasy. “They spoke about giving back to a sport that had enabled them to enjoy success on and off the field, and of their involvement in the Lloyd McDermott Rugby Foundation, which supports education through sport.”

“Throughout the evening, they made many serious points but they did so with humour and a delightful lightness of touch. Thanks to Alison and Simon Stewart whose generosity allowed us to hear these great sportsmen share with us a wonderful story.”

Indigenous Program Co-ordinator Chris Miles said the oration struck a cord with boys from the School’s Indigenous Student Program. “The boys, who knew nothing about the Ella brothers, came back the boarding house raving about the talk,” Mr Miles said.

Through its name, the Canon Frank Sheehan Oration celebrates one of Christ Church’s most eminent personalities and all he has brought to the School over his 28 years of service. The oration is part of the Centre for Ethics’ guest speaker program, which brings inspiring, challenging and thought-provoking people to the School.