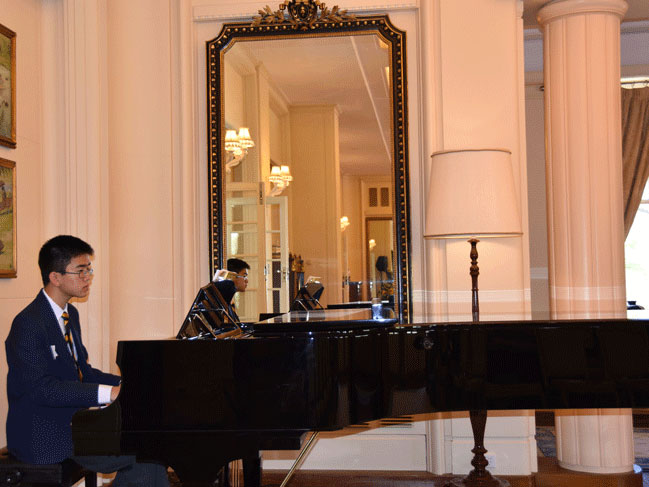 If you’ve not heard of William Hu, then make a note of the name. Because if ever a 15-year-old was on a fast track to musical fame, it’s this astonishingly gifted young student and pianist from Christ Church Grammar.

He played the finale from Tchaikovsky’s Piano Concerto No 1 with an authority, insight and virtuosity that swept all before it. It was an astonishing achievement and, in the best sense, unforgettable. Hu was a star of the evening.

So, too, was Shaun Lee-Chen who served as both concertmaster and soloist.

He brought to Monti’s ferociously difficult Czardas a bowing technique as well as an agility on the fingerboard that dazzled the ear. It brought the house down.

A potpourri of musical delights included what must surely be Leroy Anderson’s most frequently performed piece: The Typewriter.

On Saturday, though, from a seat in the rear stalls, Catherine Betts’ diligent tapping away at this now outdated piece of office equipment was barely audible. It needed some electronic boosting.

Presiding over events from the conductor’s podium, Mark Coughlan also served as master of ceremonies with an engaging linking commentary at this sold-out presentation of Vienna Pops, proceeds of which help fund various Rotary community projects.

Conducting from the keyboard, Coughlan brought nimble fingers, splendid clarity and drive to the joyous finale from Beethoven’s Emperor Concerto.

There were no fewer than six vocal soloists with Prudence Sanders and Monique Flanagan in fine voice in Delibes’ Flower Song from Lakme. Amy Manford did well in My Lips’ Fiery Kiss from Lehar’s Giuditta as did Louise Fenbury in Handel’s Awaken in my Heart. Daniella Sicari sang with relish the Laughing Song from Die Fledermaus.

There was also a charming duet by Robert Stolz sung by Sanders and Emma Pettemeridese.

All six sopranos seemed to relish coming to grips with the Champagne Chorus from Die Fledermaus.