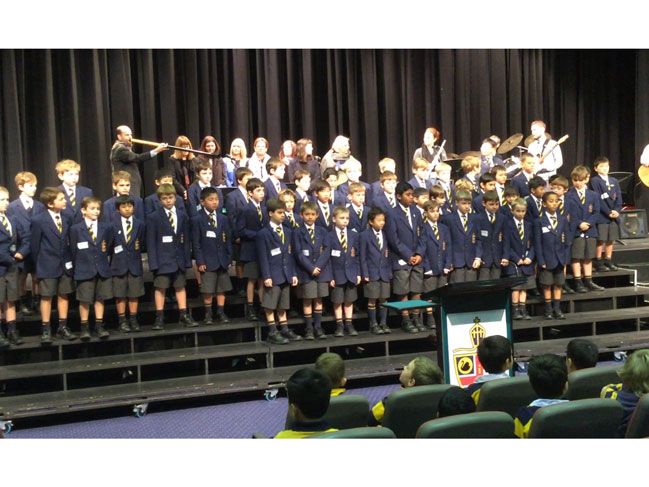 Captains of the School talked about the land we occupy here at Christ Church, and the significance it has for the Wadjuk Nyoongar people.

The Year 3 boys then took to the stage, along with the staff band, performing My Island Home. Originally written by Neil Murray and performed by The Warumpi Band in the 1980s, the song was written about Murray’s band mate who missed his home off the coast of Arnham Land in the Northern Territory. The song highlights the importance of home and place to indigenous Australians and the strong connection they have with their country.

The School will be hosting a variety of events to celebrate NAIDOC Week, including an Indigenous students vs staff basketball game, ICEA barbeque fundraiser, Senior School NAIDOC Week Assembly, a traditional feed for the Residential Community and CCGS’s Reconciliation Action Plan (RAP) launch and Art Exhibition opening. To see the timetable of events click Prep or Senior.

The land Christ Church occupies is a very significant area for the Wadjuk people. More than 40 000 years ago, they used the Swan River as a source of food, ceremony and a place for social gatherings, much like we do today.

Once a year, the Wadjuk people would walk from the hills, along the river to Fremantle (Walyalup). The young boys travelled the northern shore where they were taught lessons on how to be men for the good of their community.

Similarly, Christ Church is a place where boys learn to become responsible young men and future leaders of their communities. Thousands of years on, the history of the land continues.

NAIDOC Week is a time to celebrate Aboriginal and Torres Strait Islander history, culture and achievements and is an opportunity to recognise the contributions that Indigenous Australians make to our country and our society.