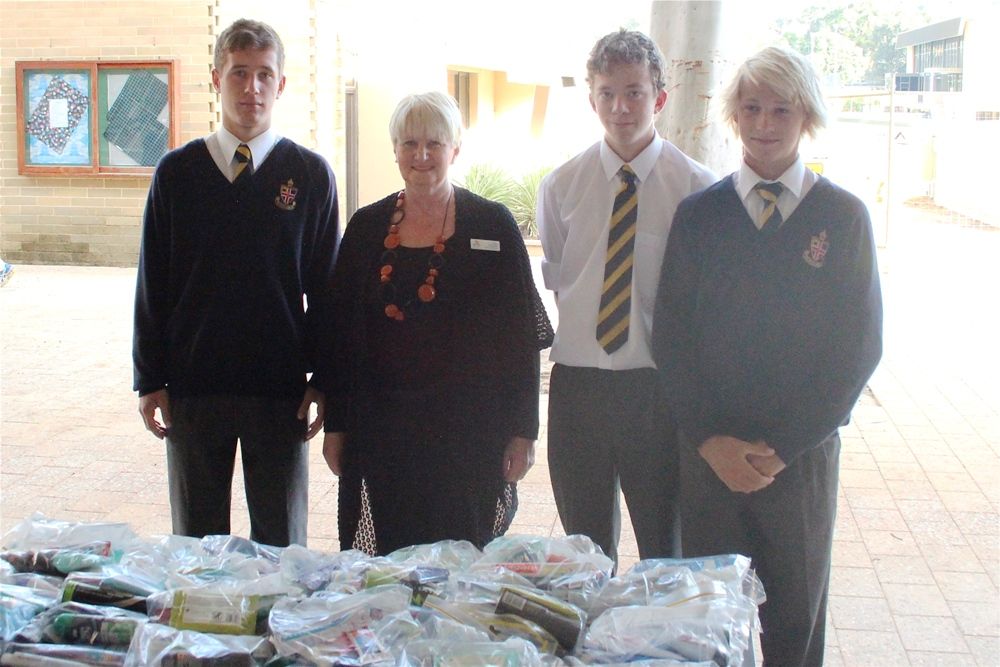 Boys from Wolsey House presented Anglicare with over 65 hygiene packs for homeless youth during a recent house meeting. The packs will be distributed by Anglicare’s night bus, which is part of its mobile street-program in the city.

This year’s Wolsey Year 10 Anglicare ambassadors Lachlan Yeo, Aidan Squires and William Burt, together with Wolsey tutor Nicole Xouris, co-ordinated the collection during Term 1. Each tutorial group was asked to contribute specific items, including toothpaste, toothbrushes, wet wipes and deodorant, which were then bundled into zip lock bags ready for distribution.

Anglicare Schools and Volunteer Co-ordinator Jill Fraser thanked the Wolsey students for their efforts. Ms Fraser said it was good to see the boys recognised the challenging life some young people had to lead because of the circumstances they find themselves in.

This is the second year Wolsey has created the packs. Head of Wolsey Gareth Phillips said the idea for the hygiene packs came after Wolsey’s ambassadors toured Anglicare’s headquarters last year and asked what they could do to help.

Mr Phillips said Jill told the boys that last year’s packs had been put to good use and were valued by the Anglicare youth workers as very useful and practical. “She said the packs would be given to children their own age, who were living difficult lives on the streets of Perth and explained that as winter approached, homelessness became a particularly challenging problem,” he said.

Mr Phillips congratulated the tutorial groups on their efforts in creating 65 packs. “Wolsey has an event planned for each term this year as part of our fundraising activities and we hope to make a difference to the lives of those less privileged than us,” he said.